Posted at 15:54h in News by Eric von Bluecher
Share

While multifamily rents have decelerated from the record highs in 2021, they are still in the double-digit growth percentage through mid-year. The average asking rent increases are expected to grow to 7.9% by the end of the year. Due to the ever so strong performance in the multifamily sector, there are over 900,000 units under construction to help the growth Nationally. 420,000 of these units should be completed by the end of this year.

Mortgage rates are up 150-200 basis points, causing lenders to be more cautious and see where the market is going first before making a decision. The Consumer Price Index (CPI) is up 9.1% this June (a 40-year high). This is causing the power to purchase homes to decrease tremendously. In June due to seeing the stock market tank 20% into the bear market, the Fed raised policy by 75 basis points, the highest seen in 20 years. It is expected to rise another 100-200 basis points in the coming months. Along with this the Fed is speeding up the sale of $9 trillion from bonds purchased within the pandemic. Analysts believe there will be a mild recession or slowdown in growth by 2024.

Rents have slowly started to decrease but with that the average national asking rents have increased by 5.7% still these first 6 months and is expected to be at 7.9% at the end of 2022. 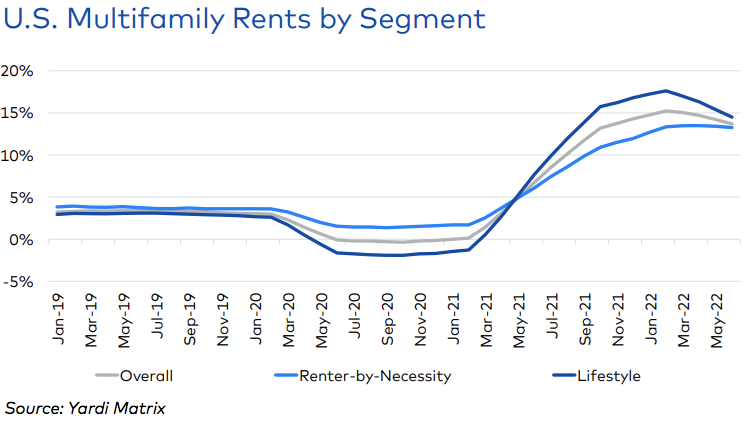 The economy has bounced back since the pandemic, recovering almost all jobs that were lost in that time. With this, wage growth has been strong, causing home prices to soar. Demand will continue to stay strong seeing that 145,000 multifamily units were absorbed through these first 6 months of 2022. San Diego had a year over year rent forecast increase of 13.1% (the highest) thus far in 2022 as seen in the graph below.

Through June the multifamily sector has seen $93.3 billion in sales but the second half of the year is expected to decline from that current pace due to the spike in debt costs. Fixed rate multifamily loans have been in the 2.75%-4.25% range before but rates have risen 200 basis points this second quarter of 2022. The forecast for 2022 multifamily lending is down 10% since last year according to the Mortgage Bankers Association. 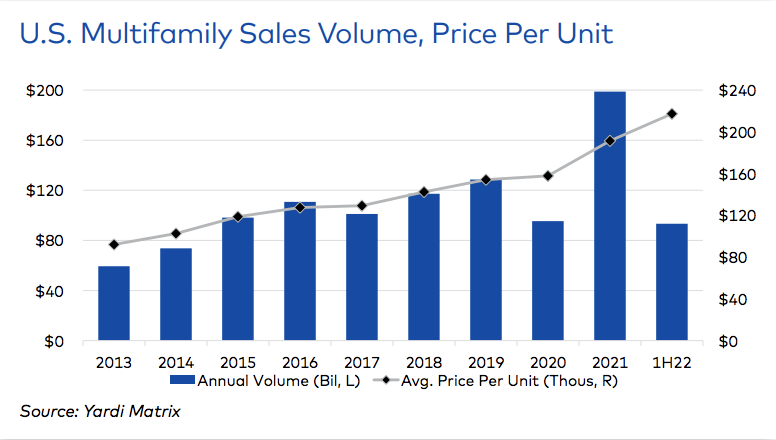 As seen in this graph, it is projected that this year will not maintain the same pace as last year in sales but will still be a solid year overall.