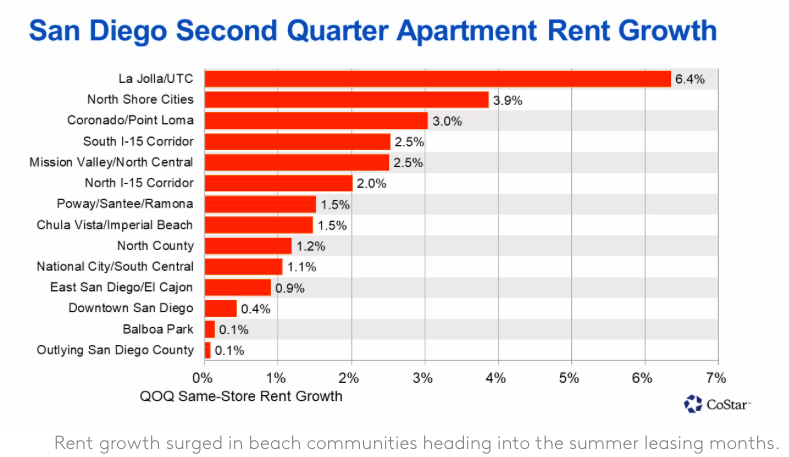 Posted at 14:14h in Uncategorized by Eric von Bluecher
Share

Landlords have typically had a long runway heading into the summer leasing months, and this year was no different. As expected, rent growth in the San Diego metro area surged in the second quarter to 2%, the highest quarterly growth since that time last year.

However, while rents picked up, it was also the slowest rate of increase during a second quarter in the past five years. The average rate of growth over those quarters was 2.3%.

Annual rent growth fell below the long-term average of 3% earlier this year, where it remained through June, recording 2.5% growth in the trailing 12 months. That marks the third straight quarter that annual rent growth has ticked down.

Largely because of record-high rent levels that passed $1,830 per month on average during the second quarter, annual rent growth is expected to fall short of the historical benchmark through the forecast.

After rents fell for two straight quarters in La Jolla/UTC, rent growth swelled by 6.4% in the second quarter. That eclipsed the five-year average of second quarter growth, which was 6.2%. Other coastal submarkets rounded out the top three with rents growing 3.9% in North Shore Cities and 3% in Coronado/Point Loma during the quarter.

The picture is a bit different when rent growth is viewed annually. Suburban submarkets continued to pace the market in the trailing 12 months.

Poway/Santee/Ramona and South I-15 Corridor led the market, both with annual rent growth above 4%. That coincided with a near post-recession low in vacancy in each submarket.

On the flip side of the coin, Coronado/Point Loma was the lone submarket to post a loss. Rents fell by 0.8%, even after a particularly strong second quarter. The high rents relative to the older communities and demographics in the submarket continue to weigh on landlord’s prospects to increase rents at the pace of other areas of San Diego.

Although rents are expected to continue picking up through July, the past few years have shown that rents typically top out in the middle of August, before they begin a slow decline through the end of the year.