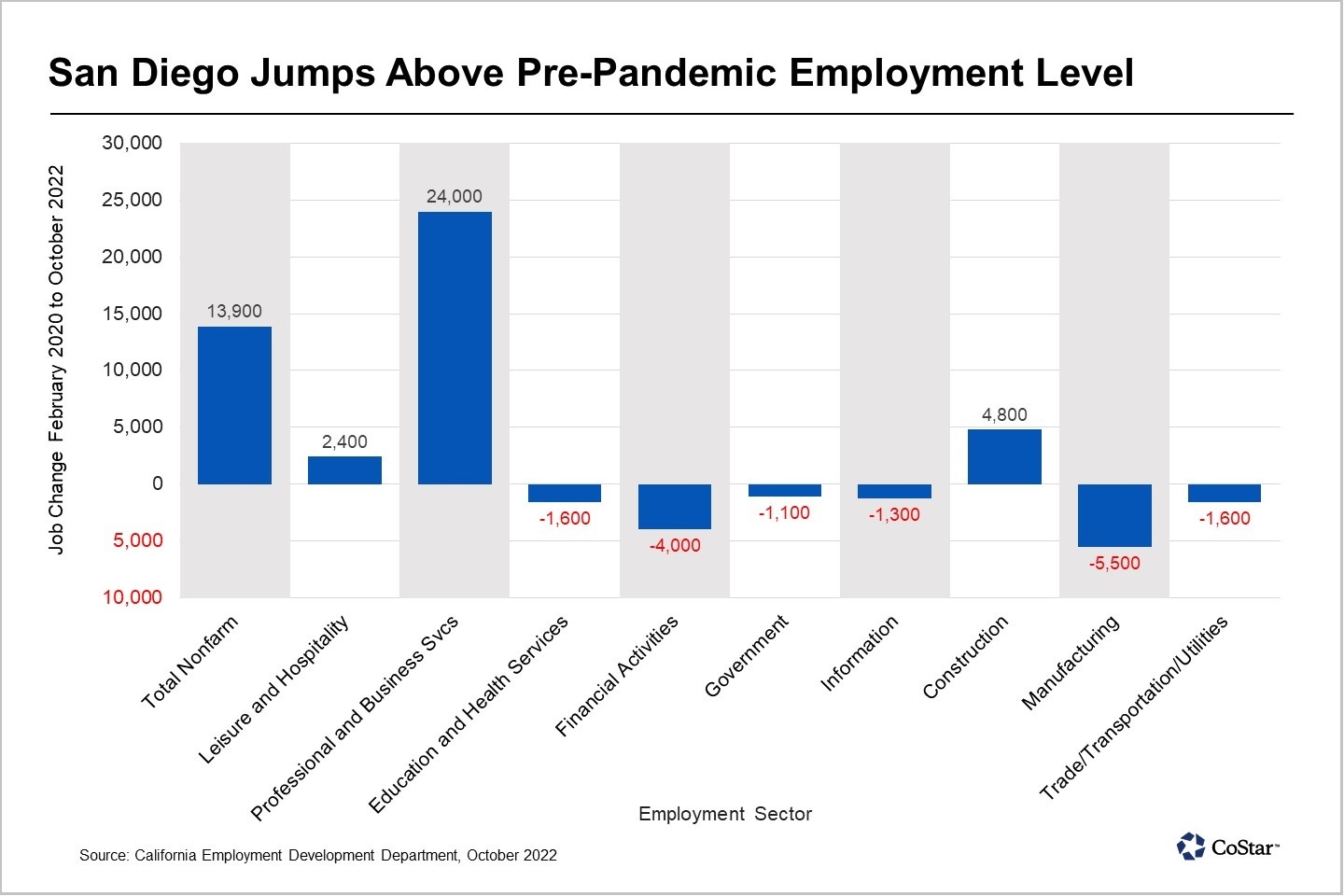 San Diego’s unemployment level shifted upward during October, to 3.2%, according to the latest report released by the California Employment Development Department. That compares to California’s unadjusted statewide unemployment rate of 3.8%.

Although San Diego added 14,000 to nonfarm payrolls during the month, there were about 5,000 fewer people in the labor force in October than in September. Compared to February 2020, the month prior to the pandemic causing dislocation across the region, 22,000 fewer people are now in San Diego’s civilian labor force.

There are several reasons why employment numbers haven’t returned to pre-pandemic levels here. Among them is a lack of daycare providers, which has forced many out of the labor force. Early retirement, an uptick in homeschooling and a general loss in population in San Diego are some of the other causes, according to the Bureau of Labor Statistics.

The government sector led all industries in October after adding 5,900 jobs, of which, 5,200 were in state and local education services. Professional and business services added 1,900 to payrolls, with professional, scientific and technical positions adding 400.

The pandemic is still disrupting the region, but the San Diego office market is one of only two major markets in California that has seen positive net absorption — measuring the difference between move-ins and move-outs — in office properties since the beginning of 2020.

Performance in the market has been led by upscale and trophy-class properties, where net absorption has increased by 1 million square feet since the beginning of 2020. Much of that demand in four- and five-star buildings has been spurred by high-tech firms such as Apple and by biotech firms including Bristol Myers Squibb.

Yet those same sectors largely took their foot off the accelerator during the third quarter, and leasing activity fell to its lowest level since the end of 2020. That has come as layoffs have begun to spread across the local landscape. According to worker adjustment and retraining notifications filed with the State of California, Heron Therapeutics, Cue Health, Bristol-Myers Squibb and Viridos are among the many firms that have announced layoffs in recent months.

Should these firms pull back their leasing activity, it could further disrupt a region that is poised to receive its largest injection of speculative development, largely in downtown San Diego, in more than a decade.

In the past 12 months, 44,500 jobs were added across San Diego, led by hiring in the leisure and hospitality and professional and business services sectors. Those were also among the leading industries to add jobs since February 2020. There were about 13,900 more jobs in October than the run-up to the pandemic, and professional and business services has added 24,000 since then. The only other industry to report job gains over this time was the construction sector.

Apple, which has added more than 1 million square feet to its local footprint over the past several years, is among the companies that has the most job ads. The tech firm more than doubled its ad postings in the past month. Apple announced prior to the pandemic that it intended to hire upward of 5,000 workers locally. Amazon also increased its number of job ads month over month.